I haven't heard anyone calling the violence and threats of violence against Democratic members of Congresss domestic terrorism, but they are. They are aimed at intimidating these elected officials, at making them think twice before taking principled but unpopular positions. And then there was the sign at a recent rally: 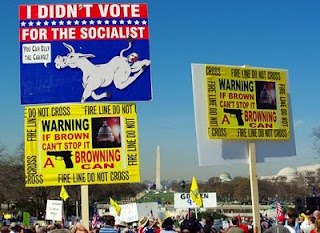 I am in favor of free speech, but when a sign suggests that a handgun is a way to achieve a political end aren't we dealing with a threat of violence, with domestic terrorism?

Jesus' prediction of his passion in today's Gospel (Matthew 20:17-28) is followed immediately by the request from John and James - through their mother - to be assigned the seats of honor in the kingdom.

Talk about missing the point!

We crucify Jesus, not because he was and is God, but because he failed to come up to our expectations about how God should act. It’s not that we weren’t or even aren’t looking for a messiah; it’s just that Jesus wasn’t and isn’t what most people are looking for. Our kind of Messiah would come down from a cross not die on one. He wouldn’t do a stupid thing like rising from the dead. He would do the smart thing and never die in the first place.

For all sorts of reasons we don't want a God who suffers, preferring one who wields a powerful sword. That preference has led Christians in the US and elsewhere into embracing an unholy alliance between Christianity and patriotism, particularly the patriotism of empire. Another theologian, the Canadian Douglas John Hall, has pointed to the danger of that alliance and urged Christians to resist the temptations of the theology of glory:

What Christians faithful to the biblical and best traditions of the faith are required to do today is not to join the ranks of those who are trying to resuscitate the Theology of power and glory, but to bear witness in thought, word, and deed to the God who enters into the depths of human distress, failure, and despair, particularly, in our case, the despair of those who do not know how to admit despair.

And if all this seems a bit depressing, I want to bear witness to the joy that we share as we embrace the theology of the cross. So many Christians who focus upon the cross seem to be missing the point as well. Again I quote Hall:

The theology of the cross…is…first of all a statement about God, and what it says about God is not that God thinks humankind so wretched that it deserves death and hell, but that God thinks humankind and the whole creation so good, so beautiful, so precious in its intention and its potentiality, that its actualization, its fulfillment, its redemption is worth dying for.

The Incarnate Word of God, the Crucified One, comes to us bearing witness to the Truth - to himself as the revelation of God. Walter Brueggemann, commenting on Micah 6:8

He has told you, O mortal, what is good;
and what does the LORD require of you
but to do justice, and to love kindness,
and to walk humbly with your God?

made what I found a wonderful assertion - we must walk humbly with God because that is how God walks with us.
Posted by Daniel Weir at 11:58 AM 3 comments:

Sacramental equality: I have come, over more than two decades of study and prayer, to the conviction that the Episcopal Church should widen its understanding of marriage to include same-sex unions. A key contribution to my own journey on this issue was Gray Temple’s Gay Unions. Prior to reading Temple’s book, I was making a distinction between marriage and same-sex unions. After reading it, it was clear to me that that distinction didn’t make sense, especially as I was meeting more same-sex couples who were raising wonderful children and who exhibited the kind of love that I have seen in married couples. More recently Tobias Haller’s Reasonable and Holy and his blog In a Godward Direction and the writings of James Alison have helped me to clarify my own thinking. I continue to read arguments against my position, but I remain unconvinced by them.

The authority of Scripture: Frequently those who disagree with me accuse me of not accepting the authority of Scripture. What is actually true is that I no longer accept what could be called “canonical” interpretations of Scripture. There were times in the Episcopal Church when the “canonical” interpretations of Scripture supported slavery or the barring of women from leadership within the Church. We have discarded interpretations which supported slavery and have been discarding those which supported patriarchy. In this I am glad to be call a revisionist because I believe the Church has to revise its thinking on same-sex unions just as it revised and is revising on these other issues.

Property disputes: Living for the past twenty-one years in New York, the question of property disputes has hardly been an issue. State law is quite clear that parishes cannot leave the Episcopal Church. When members of an Episcopal parish want to leave, they can only do so as individuals, joining an existing congregation of some other denomination or forming a new congregation. I am sorry that law is not as clear in other states, but I think that the Canons of the Episcopal Church are clear on this and that, with very few exceptions, those who leave will have to abandon any claim on parish or diocesan property.
Posted by Daniel Weir at 4:47 PM No comments:

The opinions expressed in this Blog - which was originally called The Gospel in ToyTown - are solely those of the author. You are free to reproduce or link to another site anything that I post here. Please let me know if you do that and please acknowledge this blog as the source of reproduced material.

Some of my favorite blogs